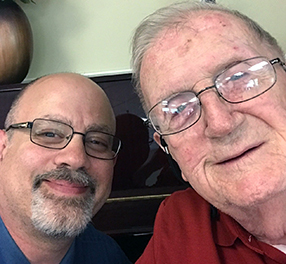 Mr. Ken Shapleigh is a 93 year-old gentleman who has lived in long-term care at Wingate of Reading, in Massachusetts, for a number of years. I have known him, and provided his medical care, since he arrived. He is a gracious man, with a sense of humor and a sharp wit. He would often chide me though for not coming to see him more often, but I would always seek him out, especially when he was in the dining hall, as I knew that he would look toward the door, and I could give him a quick salute.

He has had a number of health setbacks over the years, but he still enjoys various activities in the facility. I consider him a true master in the art of Legos, and he has many pieces on display in his room. If a certification existed, he would be Ken Shapleigh, FACL (Fellow in the American College of Legos).

If there is one thing that he proud of, it is his service to this country during World War II. However, as strange as it may seem, he has only recently been recognized as a veteran; a recognition that he believed he, and his comrades, deserved many years ago.

Mr. Shapleigh did not serve in a branch of the military; he was part of the Maritime service and served in the Merchant Marines.

It was only relatively recently that mariners, such as Mr. Shapleigh, have been recognized as war veterans. In World War II, merchant marine ships shuttled men, food, guns, ammunition, and other supplies to where the military needed them. According to the website, usmm.org, the United States Merchant Marine provided the greatest sealift in history between the production army at home and the fighting forces scattered around the globe in World War II.  The prewar total of 55,000 mariners was increased to over 215,000 through U.S. Maritime Service training programs. One in 26 mariners serving aboard merchant ships in World War II died in the line of duty, suffering a greater percentage of war-related deaths than all other U.S. services.

In the Merchant Marines, mariners would sign up “for a trip” and do whatever the contract for that trip mandated. Mr. Shapleigh told me that he traveled across “all the seven seas.” When the work was completed, and the contract expired, there would be opportunities to sign up for another assignment. After World War II, Mr. Shapleigh reached a point where he was not interested in signing up for any more assignments, and he moved on to pursuing his next career and starting a family.

As he was now recognized as a veteran, it allowed him to be a candidate for a special trip to Washington, D.C.; a trip that he wanted “more people to know about” - a trip that was a “once in a lifetime” event for him.

Two years ago, Mr. Shapleigh’s daughter saw an advertisement for “Honor Flight, New England.”  This is a service that honors veterans with a day in Washington, DC, and they visit the World War II memorial, as well as other sites. As described at honorflight.org, “According to the Department of Veterans Affairs, an estimated 640 WWII veterans die each day. Honor Flight Network will continue do whatever it takes to fulfill the dreams of our veterans and help our heroes travel absolutely free.”

Mr. Shapleigh was accepted into the program, and was placed on a (lengthy) wait list, as the program can only manage a certain number of veterans at any one time.  He was finally given a date for travel last summer. I needed to medically-clear him for the day away, which required that he leave the facility early in the morning, meet the Honor Flight group at the State Police barracks at Logan International Airport in Boston, fly to Baltimore and arrive back to Boston at the end of the day. Southwest is the carrier for the Honor Flight program, and the flight is “private”—chartered only for the Honor Flight veterans. Other veterans sign up to be chaperones for their elder comrades, like Mr. Shapleigh, and help them throughout the day, i.e. pushing their wheelchair and/or arranging for any other help required.

Mr. Shapleigh remembered the announcement about the honor flight veterans as they arrived in the terminal in Boston and how everyone applauded them as they wheeled past. He told me how the Navy sent a group from Annapolis to greet them at the Baltimore terminal. “Everyone shook my hand,” he said. He still beams when he recalls the day. He told me that “some Senator” greeted them in Washington, D.C., and Mr. Shapleigh paused as he reflected on the impact in seeing the World War II memorial. One year later, he still cannot find adequate words to describe the vision of the memorial.

It is an honor and a pleasure to be associated with Mr. Shapleigh. As I tell medical students and residents (and my colleagues), elders are truly living pieces of history: if you take the time to sit and listen, an elder can teach more powerful and inspiring lessons about our country than any classroom could. And the lessons are free—but you may have to take some chiding from Mr. Shapleigh.