Examining the ‘manel’ in LTC

All industries, long-term care included, love panels during conferences. The hope is for a dynamic conversation, one where no one will dominate the discussion and those in the audience will feel engaged.

But most of us have noticed how it’s not uncommon to see panels that are all men, and/or all white, during healthcare events.

That’s why I found it heartening to hear the Director of the National Institutes of Health, Francis S. Collins, M.D., Ph.D., say he would no longer appear on all-male panels at public scientific meetings.

“It is time to end the tradition in science of all-male speaking panels, sometimes wryly referred to as ‘manels,’” Collins said in a June 12 statement. “Too often, women and members of other groups underrepresented in science are conspicuously missing in the marquee speaking slots at scientific meetings and other high-level conferences.”

First of all, well-done. Second, what might our section of the healthcare industry learn from this?

When I’ve mentioned this dominance of white men on panels or presentations in the past, the stock defensive answer is, “We have to have the best names/leaders in the industry. It’s not our fault.”

Long-term care is a smallish pond compared to some other businesses. However, let’s look at our McKnight’s Women of Distinction program. One of the reasons we began that program is we suspected there were leaders in the field who weren’t being recognized. We were right, based partly on the number of nominations being triple what we expected.

What we were surprised by is how many of these women — ranked into an elite tier by our judges — were executives we had previously heard little, if anything, about. Some of this is a question of external communications at facilities: Do you celebrate your executives and leaders, and raise them to the attention of others? Also, we do a lot of our networking at conferences, and we love to strike up conversations with the person sitting next to us. But we’re always going to be sure to connect with the presenters or panel attendees.

The panels themselves communicate to an audience who is important. Associations and groups hosting conferences seek speakers of influence and presumably vet presentation rosters before presenting them. The nature of a panel is “Listen up. These people matter.”

Many of us, consciously or subconsciously, in turn think of these panels or presentations when we are building our own summits, webinars and live events. We turn to the people we’ve seen, who have been around and are “known” quantities. At the same time, we might be understandably wary of anyone who offers their services.

You can see where this leads all of us: To the same line-up of people making the same points. No wonder many panels can become dull.

But don’t take my, or Collins’ word for it. I reached out to a handful of long-term care executives to see how they felt about his statement.

“I applaud Francis Collins’ decision to combat the gender gap and move the needle on diversity and inclusion. I agree that change must start at the top,” said Mark Parkinson, president and CEO, AHCA/NCAL. When asked, he clarified that Collins’ “action is inspiring and will cause us to continue to evaluate the diversity of our panels.”

LeadingAge “strives to be true to our values of doing what is right, taking action and creating communities built on diverse thought. We certainly support the efforts of NIH’s leadership to challenge current norms so that women and other underrepresented groups are evaluated fairly for speaking opportunities and not excluded from leadership opportunities,” President and CEO Katie Smith Sloan told me in a statement.

Robyn Stone, the co-director at LeadingAge LTSSCenter @UMass Boston, passed along that she recently attended a meeting with 130 providers, association executives and academic aging services leaders. All of the panels included women, but there was a single person of color.

Geriatrician Cari Levy, M.D., Ph.D, the president of the Society for Post-Acute and Long-Term Care Medicine (AMDA), told me Collins’ words are “much appreciated” and agreed for a need of less “manels” in long-term care.

“I think it’s good that attention is being paid to being more inclusive on panels,” she said.

President Joe Biden’s call for greater transparency in nursing home ownership must extend to the industry’s clinical leaders as well, according to a top clinician advocate. 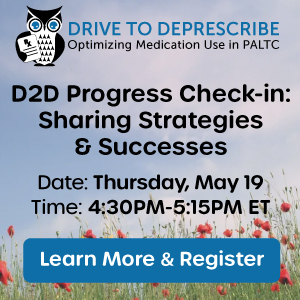