New Podcast Puts Nutrition in Older Adults on the Menu

Nutrition in older adults isn’t always a pretty picture, but there is much practitioners can do to add color, pleasure, and positive outcomes to the pallet. In a recent AMDA On-The-Go podcast, guest John Morley, MD, BCh, offered some powerful and innovative insights on this issue.

Host Wayne Saltsman, MD, CMD, started the program with some dim statistics. According to the President’s Council on Sports, Fitness, and Nutrition, he said, only 35-44% of adults 75 years of age or older are physically active; and 90% of all adults eat more sodium than is recommended. Approximately 78 million adults are obese, with obesity-related illnesses costing up to $190 billion annually.

“We are more enlightened now about nutrition than we were 30-odd years ago,” said Dr. Morley. For example, there have been many studies documenting the benefits of the Mediterranean diet. He stressed that we need to think about nutrition in two parts—one for people up to age 65 and one for those older than that. In younger people, he observed, losing weight and staying lean is often the goal. For older people, especially those in nursing homes, he said, “Weight loss becomes lethal.”

The loss of muscle and bone with aging and weight loss/inadequate nutrition, combined with the increased fall risk in older adults, puts these people at greater risk of hip fracture. About 20-30% of people who experience hip fracture, Dr. Morley noted, will die within the first year after the injury. This is just one reason, he said, that if you are older, “weight loss is very bad for you.”

Dr. Morley noted, “We keep running into things we thought were good for us that aren’t quite as good as we thought they were, and which can be tremendously lethal in nursing homes.” This includes some misconceptions about sodium intake. He explained, “We need to recognize that salt is bad, but the CDC [Centers for Disease Control and Prevention] recommended amount is too low for survival.” He suggested that people with heart disease might want to reduce sodium intake a little; but he stressed, “If you reduce it too much, the body doesn’t function.”

“The first thing we should be doing is to make sure all of our friends in nursing homes aren’t losing weight, so we should be monitoring weights very carefully,” Dr. Morley noted. “Second, you should have a diet that is suitable for everyone in the nursing home. That means you have to offer choices and watch for any residents who aren’t eating and find out why.”

There are many innovative ways to promote nutrition in nursing homes. For instance, Dr. Morley said, “We have a nutrition cart that goes around twice a day between meals and offers food and liquids to residents.” This is often done by an aide who has a list of those individuals who are losing weight. It’s important for these residents to be offered any kind of snack. If they want ice cream or a milkshake, this is perfectly okay, he suggested.

Dr. Morley also talked about sarcopenia. He noted that, according to studies, about 70% of people in nursing haves have some degree of sarcopenia. He addressed the value of a protein-rich diet and the possible need for protein supplements. However, he stressed the significance of exercise. “It’s important to get these people into an exercise program…It’s essential to have an exercise component for people with muscle loss.” Again, he suggested some innovative ideas. “We have a lot of games to get people to exercise. For instance, we have ‘Dancing with the Staff,’ where once a week staff dance for 20 minutes with different residents.” He also talked about a creative program that combines bingo with exercise. He noted, however, that residents complained—not about the exercise but about it cutting into their bingo time. Dr. Morley and his team resolved that by extending bingo for 15 minutes.

“We have to recognize that we don’t always realize that people can do these exercises, and we don’t push them to do them,” Dr. Morley noted. However, he observed that if someone goes to the hospital, that person basically loses a kilogram of muscle in the first three days. “Exercise is key,” he stressed.  “You have to make sure that residents are active and having fun. Activities need to be meaningful.”

Put exercise together with nutrition, Dr. Morley suggested, and you will see that the average resident is going to be happier, have much less muscle wasting, and will think better. “And that is the joy of working in a nursing home—not taking things away from people but giving them things that make their lives more meaningful,” he said.

Click here for the full podcast and hear more of Dr. Morley’s many insights. You also can listen to past programs here. 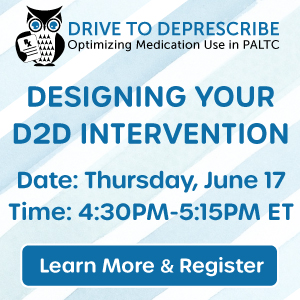