It is hard to believe that we spent almost two decades trying to repeal the flawed Sustainable Growth Rate (SGR) formula that defined how physicians got paid and now, in a blink of an eye, we must get used to a whole new way of doing business. The game changing legislation known as MACRA (Medicare Access and Children’s Health Insurance Program Reauthorization Act of 2015) builds on already existing programs and creates new ways physicians and other providers will now be getting paid. The legislation created two pathways for physician payment now known as the Merit-Based Incentive Payment System (MIPS) and Alternative Payment Models (APMs). Both programs operate under the new umbrella term - Quality Payment Program (QPP). This new QPP program will be implemented over time with first reporting period just around the corner starting in January 2017 that will impact payment in 2019. Under the law, those subject to the QPP program are known as eligible clinicians (EC) which includes physicians, physician assistants, nurse practitioners, clinical nurse specialists, and certified nurse anesthetists. Future years will include other professionals as well.

Before diving into the extensive details of each track (MIPs and APMs), it’s important to take a quick step back and review how we got here. In short, the QPP is part of the much larger effort designed to move physician payment, like all other Medicare payment, into the value-based payment world and away from the fee-for-service world many physicians have come to know. In fact, to think of this program without understanding the bigger picture of the “tectonic plate like” changes occurring with health care delivery would be to misunderstand what this is all about. The SGR perpetuated the fee-for-service issues that plagued the Medicare program and did not allow it to move physician payment into the new way of thinking like hospitals and all other facility payments. The other trouble with the SGR was that all physicians would get a decrease or increase in their payment regardless of how they themselves performed regarding cost and quality (value). Basically, if I was the greatest doctor in the world and ran the most efficient practice but the doctor down the street spent more without any better outcomes, both would get the same decrease in pay because the overall spending that has always exceeded predicted levels would force a cut under the budget process – as it always did under SGR. With a value-based reporting approach, the concept is that physicians would still receive their fee-for-service dollars but whether or not they got an increase depends upon how well they perform in cost and quality (value). That was the idea of the first reporting program in 2007 known as the Physician Quality Reporting Initiative (PQRI) that later was renamed to PQRS (System). The idea was that physicians could receive a bonus, which would incentivize them to report on quality measures aimed at improving processes and outcomes. Meanwhile, the Centers for Medicare & Medicaid Services (CMS) could collect data and have a better understanding on variation of cost and quality. The criticism, of course, has always been that the complexity, administrative burden, and lack of relevant quality measures in these reporting programs far outweigh the payment increase practices could receive, and few took the time to participate in these reporting programs.

At the same time, other approaches that relied on more of a capitated payment system with an element of quality reporting that relied on a shared savings approach, such as the Accountable Care Organizations (ACOs) and Bundled Payment for Care Initiative (BPCI), were beginning to materialize throughout the country. These approaches showed promise of higher returns with less head-to-head competition and some physician practices began to participate. First expanded by the Affordable Care Act (ACA), it lead to MACRA as the culmination of all of this work that for the first time showed a possible alternative world of payment other than SGR. MACRA builds and doubles down on these concepts creating the physician payment of the future. If previously physician practices could simply avoid participating, MACRA will make it more difficult in the future.

Barring any significant changes with the new administration, which is certainly possible but not likely given the overwhelming nature in which MACRA passed both chambers of Congress, it’s likely that these concepts are here to stay. The rules, such as the exact number of measures and minimum requirements for an APM may change, but the overall concept of value-based payment is unlikely to go away. To some physician practices who have become accustomed to previous programs, like PQRS and the Electronic Health Record (EHR) Incentive Program (Meaningful Use), these new acronyms are just a change in name and small adjustments will have to be made to meet the requirements of QPP. But for those who have yet to dive deep into the value-based world, this is an entirely new way of thinking that will require a shift in strategy. The APM track in particular is the endgame for everyone. It’s clearly the intent of CMS to ultimately have everyone participate in an APM, however very few will be able to participate in the initial years of the program. Some practices may have experience with the concepts of such models by virtue of participating in Accountable Care Organizations (ACOs) or Bundled Payment for Care Initiative (BPCI) but for many it’s a brand new world. Ultimately, it’s a world that physicians and practices can no longer ignore.

As was mentioned at the outset, MIPS is one of two tracks ECs can choose starting in January 2017. Under the MACRA law all current pay-for-reporting programs (PQRS, EHR Incentive, and value-modifier) are streamlined. MIPS creates four new categories, Quality Measures (old PQRS), Resource Use (old value-modifier), Advancing Clinical Information (old Meaningful Use), and adds a fourth – Clinical Practice Improvement Activities. These four categories will be combined to create a final score. Each of these categories will be weighed differently and will change depending on the year of the program to establish the final score. Below percentages apply for the first year of the program only.

For this category, ECs must report on at least six quality measures, with at least one that is an outcome measure or a high priority measure. While the final specifications for the more than 300 measures currently available have not been released, based on PQRS experience, it is likely that there will be measures reportable in the skilled nursing facility/nursing facility (SNF/NF) settings (meaning the denominator of the measures contains one of the CPT codes 99304-99318). The Society has provided a PQRS Tool Kit on its website that lists the measures that are reportable based on these CPT codes. A similar tool kit will be available for MIPS quality measure reporting.

The Society supported this exclusion and is working with CMS to ensure this category is applied fairly to those who see the most medically complex patients. From experience under the value-modifier, the Quality Resource and Use Reports (QRUR) showed that those who practice in PALTC settings scored much higher in cost than their peers in internal and family medicine. It may seem obvious that it would be the case without proper risk adjustment, or comparison category, however CMS’ algorithm has not yet been able to accurately and fairly account for these factors. In fact, due to the Society’s advocacy on this issue, in the proposed final proposed rule, CMS actually excluded SNF codes (99304-99318) from this category. The Society has also discussed the use of place of service (POS) codes as well as a potential self-designated specialty codes to establish more accurate comparison groups than the current ones based on American Board of Medical Specialties recognized specialties. These discussions are ongoing.

Under this category ECs must report on a basic set of measures similar to meaningful use. It’s probably not feasible to go into detail about each one, as many that practice in PALTC settings will not be able to achieve these measures. In that instance, CMS has carried over the exclusion from Meaningful Use (MU) that states that if a clinician faces significant hardship and is unable to report ACI measures they can apply to have their performance category score weighed to zero. For PALTC based-ECs there is an exclusion that states if 50% or more of your practice is in a setting where you don’t control the existence of an EHR, you can apply and will likely be excluded from this category. This is a carryover from MU.

CMS has provided a list of 90+ activities that are divided into 9 general categories including expanding practice access, APM participation, care coordination and others. ECs will have to attest that they completed up to 4 of these activities for 90 days. More information on how to select and attest to these activities is available on the CMS QPP website.

In order to be completely excluded from MIPS participation, ECs will have to be enrolled in one of the following APMs which are considered Advanced APMs under the regulation:

If none of these models sound familiar to you, you need ensure you are comfortable with MIPS participation because you will be required to participate in that program.

CMS has heard criticism over lack of available Advanced APMs and seeks to expand the number available. On several provider calls since the release of the regulations, CMS staff has talked about expanding the “Advanced” label to current APMs like the BPCI and the CCJR programs. These are likely to occur but not until future reporting years. The Society plans to work with CMS to ensure availability of and Advanced APM for those that practice PALTC medicine.

CMS also knows the complexity of switching gears on such a short notice. Thus, it has implemented a “pick-your-pace” approach for the initial year of the program. If you are completely overwhelmed right now and are ready to just give up, CMS has provided an opportunity to transition into this system by simply reporting on one measure (any measure available in SNF/NF) and submitting some data. Just by doing that, you will not be penalized. If you are ready to take a deeper dive but would not be ready until later in the year, you can participate for 90 days and receive some bonus payment, although it may not be as high as those that participate for a full year. And if you are already used to doing business under PQRS, keep doing what you have been doing and you will at least avoid any penalties and are likely to receive some (although not large amount) bonus money.

The Society plans to work with CMS to advocate for its members and provide in depth education to ensure a successful transition into a new world of physician payment that’s likely to impact your practices and your patients for years to come. Looks for webinars and educational offerings at live conferences to keep up with the latest developments. 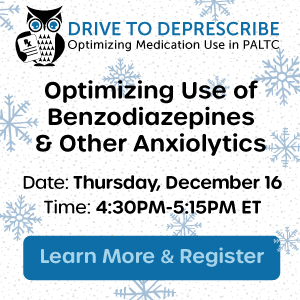