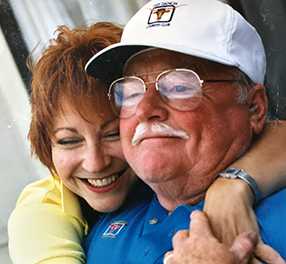 My father looked up at me and said, “I feel funny.” I gave him the test for a stroke, and he passed all of them, except writing his name. He couldn’t. I knew I had one hour to get him to the hospital.

Dad was at the hospital for three days and we were notified he would need to go to re-hab to recover from his stroke. I suggested the post-acute rehab and LTC building owned by my then employer as I knew the staff and leadership there. I told my dad he was go-ing to go to one of my buildings for rehab, and he looked at me with horror in his eyes and said, “You’re not going to put me in one of those places, are you?” To which I an-swered, “You bet I am.”

Dad was brought over from the hospital with a stage one decubitus on his back late in the evening. The facility saved a dinner tray and he was elated. They immediately put him on the egg carton type mattress and within a day or two the stage one was no longer visible on his back. Each day when dietary brought my mother a tray to eat lunch with Dad, she would exclaim, “Gee, this is better than the hospital!”

I came over the next day and left my business card on dad’s tray table. I told him if he needed anything or if someone had a question to call me. When I came back the next morning, he said, “Someone came in and asked me, ‘Just what does your daughter do here’?” I curiously asked him what he said. My father was a salesman, and he would always ask if I was hitting my numbers and making my sales, as I was in the Sales and Marketing Department. I expected he would say, “My daughter fills the place. She brings in the census,” or something to that effect, but he didn’t. He looked up at me and said, “I told them I think she makes it better.”

I realized my father knew more of what we really do than I did. He understood that in order to bring in the census, we had to have art on the walls, activities, the building had to be clean, the staff had to be friendly and the care had to be great. Going forward, I knew my mission was not to fill beds, but to continue to ‘make it better’ just as my dad said.

Dad began his rehab immediately, and I was amazed at how they could get him to move his right arm. The unknown road ahead was still a scary thought for me and my family.

After eight years selling LTC and post-acute rehab, I couldn’t believe that I was now on the other side as a family member. I found myself sobbing in the admission office with a blank check in my hand saying, “Please give him anything he wants!”

The admission director, looked at me and said, “Peg, it’s us. We’re going to take care of him like we take care of all our patients.”

The next day, I was sitting at the foot of my father’s bed, quietly crying. Helen, the RNA, came into the room and took me outside by the arm and said, “Don’t you sit there and cry in front of your daddy. You come get me, and I’ll talk you down.” I said, “Hel-en, how do you do this all day?” And she looked at me and said, “Honey, it’s a calling. It’s a calling.”

The loneliest walk a daughter will ever take is on a Sunday morning from the parking lot to her father’s room in a LTC/post-acute rehab center. Each person that looks up and smiles makes all the difference in the world.

The next day, we woke and I said to my sister, “Dad’s going to die today. I just know it.” When we arrived, it was apparent the time had come. My sister leaned into his ear and said, “Dad, when you get there, send hummingbirds.” What a great idea, I thought, as he always loved hummingbirds.

My father passed away at 2:20 pm March 18th, nine days after admission, on my birth-day.

The staff filed in one by one giving us their condolences and paying their respects to my father. One housekeeper blessed him and wept. It was the most beautiful and touching experience of my life. They were genuinely as saddened for us.

After an hour, my mother needed to leave but didn’t want to leave my father without someone watching over him until the mortuary came. The administrator, Tim, said, “I will stand right here at the doorway, and I won’t let anyone else in. I promise you.” He stood like a soldier at the doorway, my father’s protector.

As we were returning home, my sister-in-law frantically called. She said to hurry - there are hummingbirds swarming her in the driveway. She had no idea what my sister had whispered in my dad’s ear earlier that day. I looked at my watch and realized it took only 1 hour and 10 minutes for Dad to get to Heaven. He was there.

Shortly after, neighbors arrived, saying, “We came to see your dad, and there was a man standing at the door and he said, Steve is no longer here.” Tim, the administrator, kept his promise and stayed waiting at the door, watching over my father.

The next day, I sent a basket of pastries and wrote a thank you note to each nurse, CNA, housekeeper, plant ops, activity director, physician, administrative, and dietary person who ever came in contact with my father.

Words can never express the love, care, dignity and respect our family received during the nine days my father was in the rehab center.

The people working in the long-term and short-term rehab environment are angels to the families they serve. We should all be grateful they are so dedicated to their work. They not only come to work every day, but also answer their calling.

God bless them all, every day for making it better!