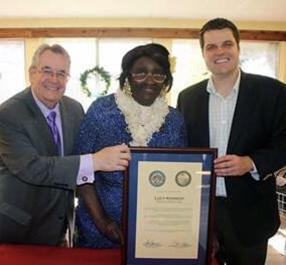 When Lucy Kennedy came to live at Signature HealthCARE of North Florida, she was not the outspoken, free-spirited woman we see today. In fact, when Lucy first arrived, things were very different.  Lucy, who had been confined to a wheelchair, had been written off by the hospital system and classified as a “behavior problem.”  Unfortunately, we see this classification on a daily basis in the world of long-term care.  As you can imagine, her life began to spiral out of control. She was given an overload of medications and placed in long-term care because there was no other place for her to go.

Thankfully, Terry Brown, Director of Nursing, and her team of clinicians were working to implement person-directed care practices. One such practice the team had put into place was the “daily team huddle.”  The team huddle is a system that engages all stakeholders to provide the best care possible for an elder by communicating new ideas quickly and efficiently. It was during this huddle that team members quickly identified that Ms. Lucy was taking too many medications and this could be the cause for her confusion.

The team quickly went to work to reduce medications one by one. Slowly, they began to see the life come back into Lucy. Her speech improved, her confusion cleared, and she was more aware of who she was. In fact, it didn’t take long for Lucy to be able to leave her wheelchair behind. She was up and walking the halls of Signature HealthCARE of North Florida.

With her confusion gone and her mental awareness more intact, Lucy began to live life with a new purpose. She wanted to give back to those who had given her so much.  She was disturbed that her new friends living there were only allotted a $35.00 monthly allowance by the state of Florida.

She heard some of the stakeholders discussing that a few politicians were visiting the home. This was a routine visit, they expected nothing out of the ordinary. However, Ms. Lucy woke up that morning to change the world. She wasn’t planning to merely “meet” Senator Gaetz; she was preparing to reach his heart.

When he approached her, she began to speak to him about the elders living there. She spoke of them as her friends, the ones who helped her to reach her full potential. She went around the room, calling out their names and their occupations. The things they had contributed to the community. She spoke about how they only received this small amount of money to cover all of their needs. To buy a candy bar, bag of chips or get their hair done. It was only $35.00!

Without hesitation she stood and looked at the Senator in the eyes. She said, “Do you think they could get a $5.00 raise? I know it’s a lot to ask.” The Senator was overcome with emotion. He promised he would fight for change.  When he took this message back, they were able to raise the personal living allowance from $35.00 to $105.00 per month for ALL elders living in Florida nursing homes! They called it “Lucy’s Law.”

Ms. Lucy went on to be named Florida Healthcare Resident of the Year and The Eden Alternative’s International Elder of the Year.

Without the team at Signature HealthCARE of North Florida who worked tirelessly to find the person beneath the “symptoms” they saw, Lucy’s Law would never have been put into place. It took the tireless dedication of a team who wanted to give her the best life possible. When true person-directed care is given, lives can change. In Ms. Lucy’s case, her life was changed and she changed thousands of others.